Mary Blair was born in 1911 in Oklahoma. She began her career as a well received fine art watercolorist, but soon moved to working in the animation industry. Her best work was for Walt Disney Studios. Her concept art was used for cartoons, full length animated features and so much more. Most notably Mary Blair’s work for Alice in Wonderland is considered by many one of her greatest contributions. 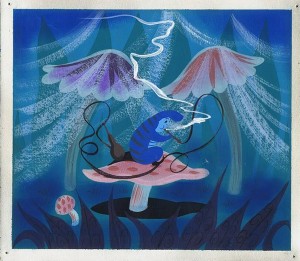 And if you go chasing rabbits, and you know you’re going to fall, tell them a hookah smoking caterpillar, is giving you a call……

The Disney attraction “It’s a Small World”, was first designed and built for the Pepsi-Cola pavilion at the 1964/1965 New York World’s Fair. It presents animated figures frolicking in miniature settings of many lands. It unified a theme of global peace. Today, there is a Small World attraction at Disneyland (in California), Disneyworld (in Florida), Tokyo Disneyworld, Disneyworld Paris, and at Hong Kong Disneyworld.

Pepsi-Cola, in conjunction with the United Nations Children Fund, presented the attraction as a salute to children around the world. The original full name was “It’s a Small World – A Salute to UNICEF”. A special adjoining exhibit extolled the theme that every child in the world has the right to security, good health, and education.      When it came to designing this international, child themed attraction, Walt Disney immediately thought of the perfect person to do it, Mary Blair. Walt not only loved her sense of color styling, but he really felt close to her unusual childlike style. Animation historian John Canemaker quotes Disney artist Roland Crump, “The way she (Mary Blair) painted – in a lot of ways she was still a little girl. Walt was like that… You could see he could relate to children – she was the same way.” Animator Marc Davis, who put Mary’s exciting use of color on a par with Matisse, recalled, “Mary Blair brought modern art to Walt in a way that no one else did. He was so excited about her work.” Also, in 1941, Mary Blair was part of a Disney expedition that toured South America for three months. She painted watercolor concepts that so perfectly illustrated the flavor of the Latin American countries, that Disney named her art supervisor on “The Three Caballeros”, and “Saludos Amigos”. This experience and her style made Mary Blair uniquely qualified to be the designer of “It’s a Small World”.